Let Babel charm you for a day: you will meet great writers and tongue-mixers, hear the unheard and speak in tongues that weren’t yours.
On June 18th Wilton’s will showcase some of the best living writers from the world over, Aleksandar Hemon, Adam Zagajewski, Ma Jian, Xiaolu Guo, Chloe Aridjis and Philippe Rahmy. Join Babel, a festival of literature and translation, creolization, instability, linguistic hospitality and diversities, as it leaves the steepest versants of the Swiss alps to reach your favorite music hall stage.

This unique border-crossing event will bring you voices and languages, worlds and rhythms, as well as cross art-form projects including a special gig by The Pussywarmers, the launch of the web’s first multilingual & typographical literary magazine, a live radio broadcast by radiogwen.ch and other side shows. Plus the after party at Libreria, the event’s official bookshop.
Listen live here: radiogwen.ch/babel-10-anniversario

China/UK: Xiaolu Guo & Ma Jian
11am - 12:30pm
A dialogue between two of the most outstanding contemporary Chinese writers, both living in exile. Ma Jian writes in Chinese and relentlessly addresses the most dangerous and shameful moments in recent Chinese history. Xiaolu Guo has been living in many European cities and began writing in English with her Concise Chinese-English Dictionary for Lovers, where the struggle with a foreign language is one of the main characters. They are both translated in many languages, and have been awarded several major prizes. Xiaolu was also awarded the Pardo d’oro at the Locarno film festival.

Switzerland: Philippe Rahmy & Vanni Bianconi
2pm - 3pm
Philippe Rahmy and Vanni Bianconi are young Swiss writers who have been writing about London in different languages and genres. Rahmy, who suffers from brittle-bone disease, after a book on his journey to Shanghai, has just published a novel based in London during the Olympic games. Bianconi is a poet who lives in London, and he is working on a travel book on the transient qualities of the city.

Mexico/USA: Chloe Aridjis
+ Franca Cavagnoli
3:30pm - 4:30pm
Chloe Aridjis is a Mexican writer born in New York and raised in the Netherlands and Mexico. After having lived in many European cities she is now based in London. Her tense and vibrant books reflect these transnational and multilingual relationships, involving Berlin and London, galleries and archives, ripping and mending, poetry and clouds.

Bosnia/USA: Aleksander Hemon
+ Maurizia Balmelli
5pm - 6pm
Aleksandar Hemon is a Bosnian writer who happened to visit the US just before the Sarajevo siege began, and has lived there ever since. Hemon writes in English and is without a doubt among the most innovative and inspiring living writers.

Poland/USA: Adam Zagajewski
+ Matteo Campagnoli
6:30pm - 7:30pm
Adam Zagajewski is one of the absolute best living poets: a descendant of Herbert, Milosz and the Polish golden age, and a friend of Brodsky, Walcott, Heaney and the transnational’s golden age.

Babel Festival
Babel is a Swiss literary festival. Its main focus is translation, understood as linguistic hospitality and a most powerful means of relation and exchange.

Every year Babel invites a guest culture, giving special attention to the phenomena of hybridization and the crossing of borders: it features writers who live across different languages and cultures and, therefore, deal with forms of translation in their creative processes.

Babel traditionally takes place in Bellinzona, Switzerland, a country whose own multilingualism represents an experiment in translation.
babelfestival.com

Babel London
For its 10th anniversary Babel literally crosses borders, travelling to London for an edition in a city undergoing constant transformations. Yet if London is culturally very diverse, its literary culture is mostly monolingual. And if English is the global language, translation is acquainted with borders and at home in the absence of home.

On June 18th you’re invited to meet some of the best writers and translators from the many countries and languages that Babel has hosted throughout its 10 year history.

In order to keep pushing translations across linguistic and geographical borders, in September 2016 Babel will invite London-based writers to the Bellinzona festival. 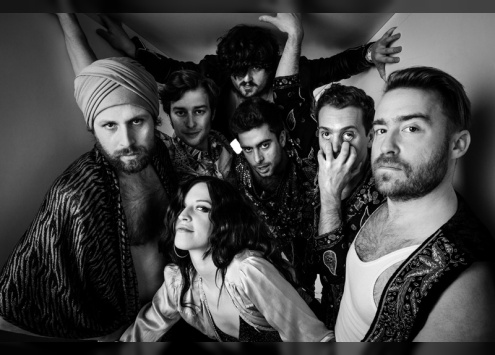 The Pussywarmers bring you a lively mixture of music from the Dope n Glory Jazz era of the mid 1920's. With horns, upright bass banjo and many more acoustic instruments, they have a wild and...