Everyone has a story about the song that changed their lives.

3rd July to 4th July . 7:30 to 9:30 approx, including interval .
Full Price £8 to £12; Concessions £6 to £10
OneTrackMinds is a live storytelling event about the way in which music affects the way we live our lives.
Each night,  the stage is given to six guests - a vibrant selection of writers, thinkers and musicians - each with a story about how music has affected them. An entertaining cross between Desert Island Discs, The Moth Radio Hour and TED Talks, OneTrackMinds will leave you feeling engaged and inspired and all the more aware of the transformative power of music.
Returning to Wilton’s for a third show, OneTrackMinds presents a thought-provoking and engaging way of thinking about the music we love.

Mark Thomas Comedian
Mark Thomas has won awards for his stage work including a Special Fringe Award for Outstanding Contribution to Edinburgh and for his human rights work including the Amnesty International Freedom of Expression Award. He has created six series of the Mark Thomas Comedy Product for Channel 4 and five series of The Manifesto for Radio 4. He is the author of five books on subjects as diverse as the arms trade, Coca-Cola and the Israeli Wall in the West Bank.

Tulip Siddiq MP Politician
Tulip Siddiq MP is the Labour Member of Parliament for Hampstead and Kilburn. Since her election, Tulip has served as the Shadow Minister for Early Years, and in the Shadow Culture Media and Sport team. She resigned as a Shadow Minister to vote against triggering Article 50 and Brexit in order to support the thousands of EU nationals living in her constituency. Before Parliament, Tulip worked at Amnesty International and Save the Children, leading campaigns against human trafficking.

Guy Pratt Musician, Comedian, Actor
In a music career spanning more than 30 years, Pratt is best known for his work as a prolific session bass player, working with artists including Pink Floyd, Roxy Music, David Bowie, Madonna, and The Smiths.

Antosh Wojcik Performance Poet
Antosh Wojcik is a poet, performer and Lecturer of poetry and creative writing at University of Winchester. He is one half of Post-Everything, a sound art duo. He has performed at events around the UK, including TEDx East End 2015 and festivals such as Poetry&Words Glastonbury, Latitude and Bestival, as well as internationally at Sofia Poetics 2015. He has received live literature commissions from Penned in the Margins, Free Word and Apples and Snakes. Penned in the Margins is producing his cross-arts drumming and poetry show about dementia, ‘Building A Voice-Percussion Gun to Kill the Glitches In Memory’.

Jen Offord Journalist
Jen is the sports correspondent for Standard Issue, the women's magazine founded by comedian Sarah Millican, and part of its podcast team.

Catherine Mayer Writer and Campaigner
Catherine Mayer is the author of three books, Amortality: The Pleasures and Perils of Living Agelessly, Charles: The Heart of a King and Attack of the Fifty Foot Women : How Gender Equality Can Save the World!. She spent more than three decades as a journalist before co-founding the Women’s Equality Party. She served as the elected President of the Foreign Press Association in London from 2003-2005 and is on the founding committee of Women of the World Festival at Southbank Centre.

Jay Rayner Journalist
Jay Rayner is best known as restaurant critic for the Observer. For a while he was a sex columnist for Cosmopolitan and has won numerous awards for his criticism. His latest full length book is A Greedy Man In A  Hungry World: How (almost) everything you thought you knew about food is wrong. He chair’s BBC Radio 4’s The Kitchen Cabinet, and is a regular on British television, where he is familiar as a judge on Masterchef and, since 2009, as the resident food experts on The One Show. He tours Britain performing various one man shows, based on both Greedy Man, and his short book My Dining Hell, a collection of his most scathing restaurant reviews. He is a sometime jazz pianist and in 2012 formed the Jay Rayner Quartet with whom he regularly performs.

Rachel Long Poet
Rachel Long was awarded a Jerwood/Arvon mentorship in 2015. Her work has featured in Magma, The London Magazine, and is forthcoming in Butcher's Dog. She won The Poetry School and Soda Pictures poetry competition 2016. Rachel is Assistant Tutor to Jacob Sam-La Rose on the Barbican Young Poets programme, and is the leader of Octavia - poetry collective for women of colour, housed at Southbank Centre, London.

Bompas & Parr Artists
Sam Bompas and Harry Parr first came to prominence through their expertise in jelly-making, but their business rapidly grew into a fully fledged creative studio offering food and drink design, brand consultancy and immersive experiences across a diverse number of industries. Genre-defining projects include Alcoholic Architecture, an inhabitable cloud of gin and tonic; the world’s first Multi-Sensory Fireworks display for London New Year’s Eve 2013; and the Taste Experience for the Guinness Storehouse in Dublin. Bompas & Parr also founded the British Museum of Food, the world’s first cultural institution exclusively dedicated to food and drink, and has published six books that explore humankind’s relationship with food.

Deborah Frances-White Comedian and Writer
Deborah Frances-White’s BBC Radio 4 comedy storytelling series won The Writers’ Guild Award in 2016 for Best Radio Comedy and her hit podcast The Guilty Feminist (5 million downloads in its first year) was described in the Guardian as ‘hilarious, irreverent, eternally surprising, classy as hell genius’.  Deborah is an expert storyteller and has had script commissions from Channel 4, the BBC and Fox Searchlight as well as performing in the New York storytelling show The Moth.

Debris Stevenson Poet and Performer
Nurtured by the Roundhouse, Debris was followed by Chanel4 for 2 years, published by organisations such as Louis Vuitton, Oxford University, BBC Radio 4 and finally by Flipped Eye with her debut pamphlet, Pigeon Party. A social carrier pigeon, Debris has performed her poetry from an ampitheatre in Kayamandi, South Africa to a classroom in Englewood, Chicago. Curve Theatre breakthrough Artist, Heatwave freestyle dancer and Mouthy Poet Founder, Debris works to develop young talent in the East Midlands and beyond. Debris is mainly now focusing on her debut grime poetry show, Poet in da Corner.

An entertaining cross between Desert Island Discs, The Moth Radio Hour & TED Talks, OneTrackMinds is a live storytelling event which explores the transformative power of music. Join a vibrant s... 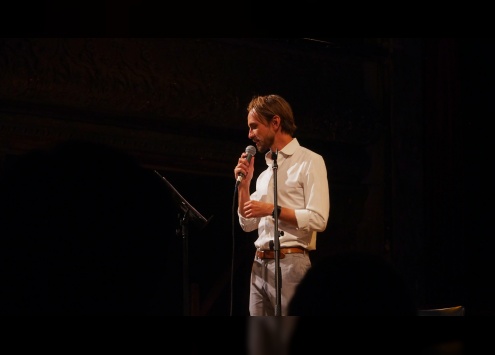 An entertaining cross between Desert Island Discs, The Moth Radio Hour & TED Talks, OneTrackMinds is a live storytelling event which explores the transformative power of music. Join a vibrant sele...